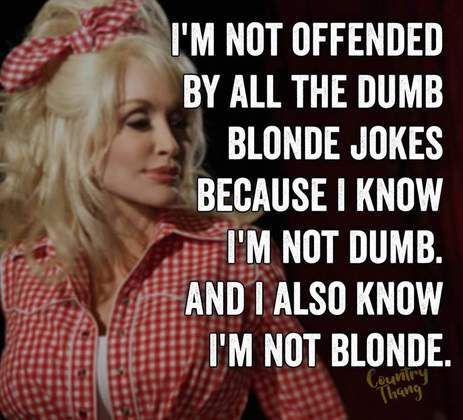 I came across this interview that Barbara Walters did with Dolly Parton in 1977 and at first I was so shocked by the blatantly judgemental tone that Barbara takes with Dolly.

Barbara tries to dis-mantle Dolly’s character with each question… and she’s so condescending too! As a woman who has a deep disdain for other women tearing their female sisters down, it made my blood boil.

But then I watched the interview again.

I stood back and watched Dolly remain consistently elegant and classy as she patiently answered Barbara’s petty questions.

And it became clear to me: Dolly is in on the joke. She intentionally created a BRAND and a persona, which is still thriving more than 50 years later.

Almost every quote out of Dolly’s mouth is a mic drop:

“The only person that makes money out of Dolly is Dolly”

“I would never stoop so low as to be fashionable”

“I’m very real where it counts, and that’s inside”

“We’re proud people with a lot of class.  It’s country class, but we’ve got a great deal of class”

Can you image YOURSELF being so self assured, in such a judgmental society?? This is Dolly’s magic! She’s completely unapologetic and consistent with who she is.

Dolly, you Queen! I love everything about you.

My wish for you: in a world of Barbaras, be like Dolly!

This is the power of a well-defined personal brand: you’re able to stay in your lane and don’t let competitors or detractors take you down.

Every personal branding photoshoot starts with the conversation about your unique brand. We work together to create images of you that attract your raving fans — so you can channel your inner Dolly!

If you’re ready to get clear on your personal brand, let’s talk!!